On Jan. 8, Town of Huntington Supervisor Chad Lupinacci (R), Councilwoman Joan Cergol (D) and Councilman Ed Smyth (R) were joined by Dr. Harvey Manes of the Manes Peace Prize Foundation, archaeologist Allison McGovern of VHB Engineering who is overseeing the dig, town officials and members of the community during the second day of the archaeological dig taking place at the Peter Crippen House, 61 Creek Road, Halesite, a site significant to the town’s African American history.

“The long-term plan is to relocate the restored structure, if it is feasible to do so, to a more suitable site to serve as a museum or use any salvageable timbers in some educational capacity dedicated to Huntington’s African American history,” Lupinacci said.

The supervisor’s office has been working closely with the Town Historian Robert Hughes, Engineering Department and the Town’s African American Historic Designation Council to ensure that the Peter Crippen House, which is in severe disrepair and is set to be demolished, can be properly preserved, as the site is integral to Huntington’s African American history. The supervisor said there will be a follow-up regarding what is found during the dig. 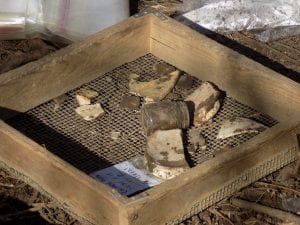 One of the items discovered during the dig was a Vaseline jar dating back to the turn of the last century. Photo by Lina Weingarten

In September 2020, Lupinacci and Hughes were able to secure an $8,500 donation from the Manes Peace Prize Foundation to conduct an archaeological study on-site before any demolition occurs at the Crippen House.

“African-Americans made an important contribution to the history of Huntington which needs to be recognized,” Manes said.

The town also applied for $4,000 in Preservation League of New York State grant funding for a structural assessment of the house to determine to what extent the building, or its timbers, can be preserved for reconstruction at another site, the location of which has yet to be determined. In November 2020, the State Historic Preservation Office determined that the house is eligible for listing on the National Register of Historic Places, which makes the property eligible for state grant funds. The town is currently awaiting for the decision on the grant funding.

According to the town, the north wing of the Peter Crippen House is believed to be Huntington’s first mill building built in 1658. In 1864, the home was purchased by Peter Crippen, an African American who was born a free person in 1809 on a plantation in Virginia and came to Huntington in the 1830s. Crippen was a prominent member of Huntington’s African American community, and in 1843, he was a founding member of the African Methodist Ebenezer Church in Huntington (currently the Bethel AME Church).

McGovern at the Jan. 8 press conference, said some of her early findings at the site included pieces of ceramics and glass, including a glass Vaseline jar dating back to the turn of the last century.

The archaeological study resumed Jan. 13, and pending weather conditions, will last approximately 4-5 days total, according to the town.